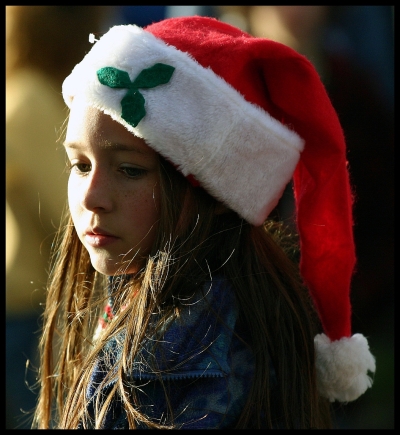 It was one of those days when all seemed wrong in the world.  A day when you wonder if you will really win the fight of faith you are in.  Darkness was rising, my hopes sinking.

As I got ready for bed that night I was just plain heartbroken.  I fell to my knees in prayer and could say only one thing, “Lord, do we really win?”  Then I cried.  I cried for what upset me that day and I cried for the sorrows of the whole world, as best I could know them.

After that I crawled into bed.  My husband, a pastor, had recently preached about Paul and Silas singing hymns at the end of a hard day.  The shoe fit, so I put it on and laced it up the best I could.  I found some hymns on my iphone and tried to sing along.  Then I reached over and turned out the light.

I had been lying in bed for twenty minutes and was just ready to drop off to sleep when I heard it, a voice in my heart.  It said one thing, an odd thing for a hot August night.  “The grinch will not stop Christmas from coming.” it said.  The voice was so matter of fact.  And the message was given as a doctor might give a simple diagnosis.  It was given as if I was to, in light of that diagnosis, go to sleep, rest well, and rise to live in hope.

“The grinch will not stop Christmas from coming.”  I began to think about that old Dr. Seuss story.  I compared it with my own day.  The grinch crept into Who-ville with plans of spoiling everything.  He snuck into “Who” homes, snaked across “Who” floors, and cursed “Whos” under his breath, as he stole what they had hoped for.  He even swiped the “Who hash.”  He took it all!  Or did he?

Suddenly in my mind’s eye I was zeroing in on the end of the story.  The part where all the “Whos” great and small, in spite of it all, hold hands and…. sing.  Sing like Paul and Silas.  Sing like I had attempted.  “Dah Who Dor-aze” they sang.  I never understood that song.  Until now.  Now I know what it means.

As I began to fall asleep for the second time that night I heard that voice one more time- quiet, calming, true.  It said, “Keep singing Cindy Lou.”

“Just when I need Him, Jesus is near.

Ready to help me, ready to cheer.

Just when I need Him most.

Just when I need Him, Jesus is strong.

Bearing my burdens, all the day long.

For all my sorrows, giving a song,

Just when I need Him most.”